“When Fernando Cellicion came in Santa Fe for the sessions of my next cd “Earth Link” (to be released at the end of 2004), I proposed him to come back in Zuni Pueblo for a project of a solo album more closer than what he is used to do ( solo flute shows ). During the recording sessions in his home and then back in my studio in france, the original idea turned to an hybrid project between tradition & modernism. No rythms but a lot of strange effects generated by the flute itself, some synths drones and music of open tuned guitars played by the wind. Thanks Fernando.” garlo

Fernando Cellicion is very activ in Zuni Pueblo as a musician, a teacher, & a brother for kids. He is very open minded with modern world and work a lot for maintaining Zuni traditions & culture. 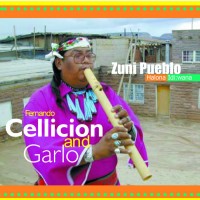